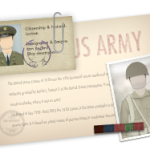 Upon request for a search of an individual’s military status as of a specific date, SCRACVS performs this search and provides results, usually within 24 hours.

The purpose of this service is usually related a legal matter. According to the Servicemembers Civil Relief Act, a federal law, you cannot get a default judgment against a person on active military duty without a court order. The SCRACVS helps clients determine whether their customers or tenants are in the military, helping them comply with the law by taking the necessary steps in the legal process.

However, if you are simply searching for military personnel records, separation documents or medical records for a matter unrelated to a lawsuit, all these are available online for free.

You can get historical records from the United States National Archives. Detailed military personnel records are available to:

This information can be obtained at the EVetsRecs system. However, you can also mail in a request using form 180.

Access to Military Personnel Files for the General Public

If you are not the veteran or a family member, some information is still available to you at the National Archives of St. Louis.

However, there is a big difference between the archived records and nonarchival federal military records. War records are transferred to the Archives 62 years after the termination of military duty.

For example, on Dec. 8, 2016, you could find archived records if the person left active service on or before Dec. 8, 1954. However, more recent records are in the Federal Records Center, subject to access restrictions. The archives’ website provides guidance on determining the difference between archived records and regular personnel records.

Other sources help you find where a servicemember is stationed or guide you in genealogical research.

The National Archives also maintains a treasure trove of specialized databases that list war records for: