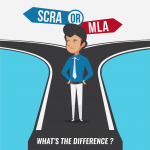 Two distinct federal statutes provide protections for servicemembers in active service or those recently retired. The SCRA is the successor to the old Soldiers and Sailors Civil Relief Act of 1940. The Military Lending Act is more recent.

But what are the differences between the SCRA and the MLA? First, the SCRA is much more expansive, but generally only affects debts and obligations incurred before active duty. Also, the MLA covers mostly consumer transactions entered into while in active service.

The SCRA vs. the MLA: Which Covers Whom?

The SCRA covers members of the eight branches of the military. These are the Army, Navy, Air Force, Marines, Coast Guard, and commissioned officers of the National Oceanic and Atmospheric Administration and the Public Health Service. Coverage includes reservists under call-up orders for greater than 30 days, provided that the call-up is by the president (as opposed to a governor). Dependents may also be covered.

However, the MLA covers only the Army, Navy, Air Force, Marines and Coast Guard, including reservists under call-up orders for greater than 30 days, provided the call-up is by the president (as opposed to a governor). Covered dependents may be entitled to MLA protections.

What Types of Obligations do the SCRA and the MLA Protect?

The SCRA protects the obligations below if servicemembers incur them PRIOR to active service. This is regardless of whether the obligation is personal or business.

The MLA extends consumer credit to servicemembers and their dependents. Obligations include:

What Are the Main Protections Under the Statutes?

Obligations NOT Covered by These Statutes

SCRA: Any obligation that is entered into after the start date of military service.

SCRA: The Servicemembers Civil Relief Act Centralized Verification Service is a resource for determining whether an individual is covered by the provisions of the SCRA (as opposed to the MLA). We can provide military verification even if the Social Security number is unknown. Affidavits are available for next-day delivery.

MLA: The MLA resource can be found at mla.dmdc.osd.mil.